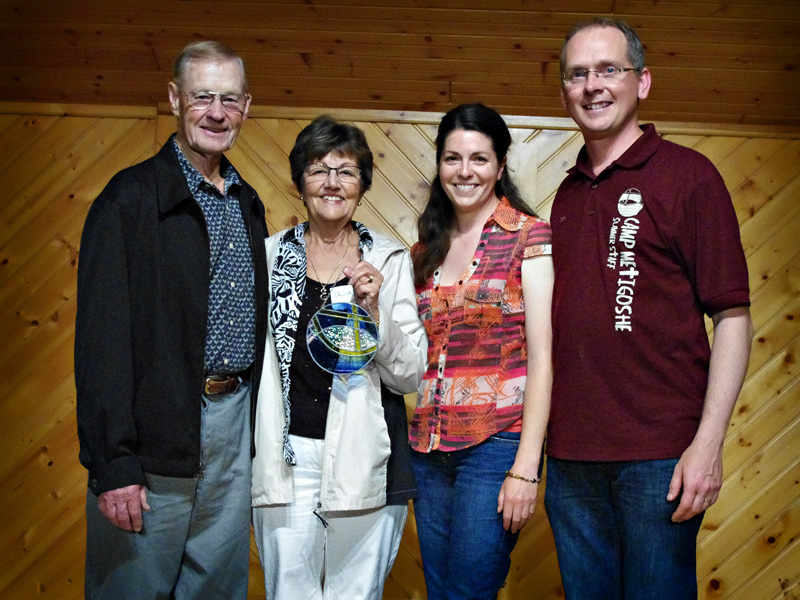 Executive Director Jon Halvorson had the privilege and honor of announcing the Director’s Reflection award at the Century III Appreciation Dinner at Pelican Lake on June 28. The award is given to someone who has “extraordinarily influenced Metigoshe Ministries to the glory of God.” This year’s recipients of the award are Owen and Elizabeth Kornkven. They are members of Metigoshe Lutheran and are actively involved in the life of the congregation as well as the ministry of Metigoshe Ministries at a very deep level. The Kornkvens have been active financial supporters of our ministry throughout the years, and were major donors to the Center of Life Appeal in the 1990s. They also donated the beautiful A-Frame Parsonage in which the Halvorsons reside. Elizabeth is also actively involved in quilting and has helped to create innumerable pieces that have been donated and sold at the annual quilt auction. She is also a regular presence when volunteers are needed to come and prepare our mailings that go out throughout the year. Owen helped to build the metal bell tower that sits near the main entrance to Metigoshe Ministries. He is also an accomplished pilot and generously donated his time and flying skills so that we could get some beautiful fall aerial photos of the Christian Center and summer camp sites. These are just a few of the many things that Owen and Elizabeth have done for Metigoshe Ministries. We are happy that they were the recipients of this prestigious award, and thank them for their endless support to Metigoshe Ministries.